first ever attempt so did BLD really safe

Nice! I should try this again soon

I don't think this is my PB, but still WAT 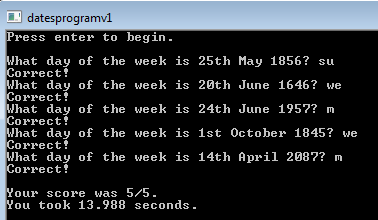 Sub-20 seems to be easy enough, which is good, because that means I haven't got slower.

Sub-20 seems to be easy enough, which is good, because that means I haven't got slower.
Click to expand...

Where can I learn this and which program do you use?

2nd best solve ever, no parity

I was gonna ask if you could film some, but I checked and you have a 2:16 from a couple of years ago. It's insane.

So, this happened.
I'm kinda extremely surprised that happened.

PixelWizard said:
Where can I learn this and which program do you use?
Click to expand...

Copy+paste from another thread because I'm lazy:

That was a while ago though, and now I do it in almost reverse order. I mod7 after doing the year so I'm dealing with smaller numbers. Also, the last two things become just one after a while; you eventually know what number each year is without having to calculate.
(I still have to calculate a couple of them, but I'm getting better)

I wrote the program myself, and it isn't very good. The memoriad program is probably better, and lets you practise other memory things.
(my program has a couple of extra things I included for practising dates which the memoriad software doesn't have though... but if you want to use it you'll have to tell me how I can give you a .exe file, because I don't know how to send files without something like an email )
T

The moyu pyra is reallllll