The 5x5x5 cube (also known as the Professor's Cube, and normally referred to as the 5x5x5 or 5x5) is a twistable puzzle in the shape of a cube that is cut four times along each of three axes.

The 5x5x5 cube was invented by Udo Krell in 1981. Several designs for the 5x5x5 were proposed at the time, but it was Krell's design which was first manufactured (by Uwe Mèffert) in Hong Kong in 1983.[1] It was marketed by Ideal Toys in Germany as "Rubik's Wahn" (Wahn = delusion or illusion). They were also sold in Japan under the name "Professor's Cube".[2] In the 1990s Meffert reissued the "Professor's Cube".[3] In 1999 Chen Sen Li patented his East Sheen 5x5x5 cube. In 2004 Panagiotis Verdes filed a patent for big cubes which provided an improved mechanism for the 5x5x5 cube which he produced as part of the V-cube range. Since 2010 many Chinese companies beginning with Shengshou have released their own 5x5x5 cubes. 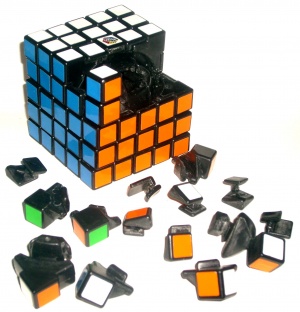