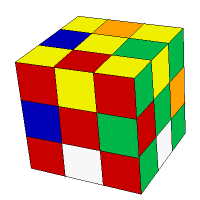 The superflip is a famous position of the 3x3x3 where all corners are solved, and all edges are in the correct location but flipped. Despite its symmetry, this is an extremely difficult pattern, which is known to require 20 moves HTM to solve (in fact it was the first position that was proven to require that many moves). No position exists that requires more than 20 moves (see God's Number).

One optimal solution in HTM for the superflip is

Another solution which requires 24 turns with STM is

This is particularly easy to remember, as it is simply (M U')4 followed by a y z', which is repeated three times. A mirror alg that may be easier to execute quickly is ((M' U)4 y' z')3.