DaYan (also known as 大雁, DY, Big Goose, DaiYan, and TaiYan) is a cubing manufacturer of many well-known, but outdated, speedcubes such as the GuHong and the ZhanChi. It is making a comeback in the speedcubing world with the TengYun 3x3 and 2x2 cubes, as well as with the GuHong V3 M.

DaYan is a Chinese brand designed by Daqing Bao (包大庆). His username on MF8 is "大烟头" (Da Yan Tou). The logo on Dayan cubes uses the last charactor "头" (Tou) and means head or first. The brand name is DaYan 大雁 (note the different "yan" character 雁), and it refers to a wild goose (specifically the Swan goose, Anser cygnoides).

The Dayan Taiyan was the first cube made by Dayan. It was originally just called "Dayan 3x3", however it was mistranslated as "Taiyan". In 2011 "Taiyan" (which means "Enormous Blaze") was adopted as the official model name. [1] They are now quite rare to find and can be discerned from other Dayan cubes by their lack of Florain holes. 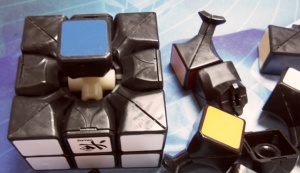 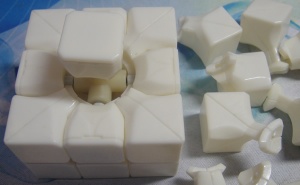 The GuHong Cube has edges which have an unusual shape and split apart in two pieces, similar to one of the V-Cube 6 internal pieces. The corners have stalks and split into thirds and have two little Y-shaped parts that go into holes that are in the corners to attach the thirds. The centers are bigger and different from a normal DIY. Internally the inner circumference of empty space is smaller than usual. It is recommended to set the tensions to tight, as it may pop.

The older versions were considered to be better than their newer counterparts however. The plastic was strictly ABS which gave them a much faster and smoother feel, while the newer GuHongs were made with a mix of ABS and PC plastic, which has a harder feel, making the cubes seem to have a laggy, sticky feel. The characteristics of the older GuHongs were: black screws, clearish opaque core, softer plastic with a slightly muted black color rather than shiny (the white ones are shiny but a brighter white), the cylinder inside the center piece (which holds the screw) is slightly shorter and does not come up to the top of the center piece (while the newer ones do), and the center caps had much longer tabs on them. The old ones are quite rare to find. 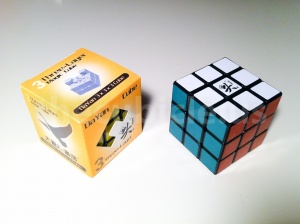 Released April 2012. This is the second version of the Dayan GuHong. It was pretty much a GuHong with anchor pieces. It had a different feel to the original GuHong. The plastic is different and seems to give the cube a "cheaper", thinner feel. Corner cutting is excellent and layers seem to pop into place, due to the torpedoes.

Released to some cube stores December 2019. This is a much more modernized version of the revolutionary GuHong, featuring ,magnets like the TengYun, wavy lube tracks on the pieces, rounded corners, and larger Florain holes. It can corner cut past 45 degrees and reverse corner cut nearly one piece if at the right tensions. It also is much less prone to popping, due to modernized torpedos.

Released 2010. This is the first version of the Dayan LingYun. This cube was a fast cube but prone to popping. It was slightly smaller, yet heavier than the GuHong, with similar pieces, but with bigger "dips" for better corner cutting. The "stalk" areas of the edges are slightly longer, which was supposed to (but failed to) reduce popping. 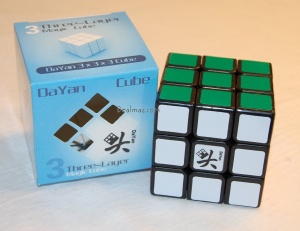 Released September 2011. This is the second version of the Dayan LingYun. The main difference between this cube and the first version is that this cube included torpedo pieces, preventing (most) pops. Like the GuHong v2, this cube also has a different feel than the original LingYun. This is mainly due to the torpedoes, but the plastic seems different again. The original Ling Yun plastic feels closer to the original ZhanChi, while the LingYun v2's plastic, feels like that of the newer ZhanChis. 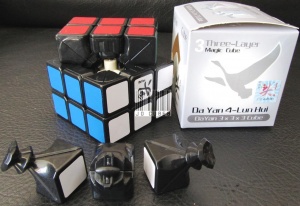 Released April 2011. This is the fourth 3x3 cube in the Dayan series. This was the first Dayan cube to include torpedo pieces. It was heavier than most cubes, and a bit sluggish, but what made it special was the anchor ("torpedo") pieces attached to the edges which reduced popping. If the tensions are too loose, however, it would pop, but it could still be tensioned very loose and not pop. This cube becomes reasonably nice after a good breaking in period and proper lubing. The corner cutting was considered superb, with a unique feel.

Released July 2011. This is the fifth 3x3 cube in the Dayan series. It became one of the most popular speedcubes (and the one used by Feliks Zemdegs to obtain multiple former world records). Like all other Dayan cubes, it comes in stickered and stickerless versions.

It was similar to the GuHong, but with "anchors" to prevent popping and ridges on the edges to reduce popping even more. Unlike the GuHong, which is a bit clicky, this cube is very smooth. The anchor pieces are removable and the ridges on the edge pieces are often enough to prevent most popping. Corner cutting is excellent, but popping will occur if tensioned too loose. The cube, if not tensioned properly, will have a serious problem with the center caps staying in place. Like the GuHong, the original batch of this cube was different and much better. It had much softer plastic which gave it a much smoother feel, while the newer ones had harder plastic, which give it a scratchy, smacky feel. It is very difficult to know which one you have, unless you know the feel of both. The ZhanChi was also, by far, the most modded cube, ever. There are several different "versions" of this cube sold in different stores throughout the world. The Cubicle used to sell a one handed version, as well as a version called the ZhanChi Silk, however these are both out of production. Puzzle Addictions sold a ZhanChi with a modded center piece (CPM). Lubix had the ultimate ZhanChi, with the 48 point edge mod, etc. This cube was also available in numerous shapes and sizes.

The smaller 55 & 50 mm Zhanchis were better suited for one-handed solving, because the smaller size made it easier to handle, it is also available in 42mm but the cubing classroom mini cubes are generally considered to be better.

Released November 2018. A substantial improvement on the ZhanChi 2017, but still an underwhelming cube.

Released 2012. This is a smaller version of the Zhanchi, suited towards younger cubers and people with small hands. Used as the core for the DaYan Zhanchi 2x2, which was widely considered the best 2x2 on the market, but has since been outcompeted.

Released February 2013. Considered a disappointment, this cube saw the end of Dayan's dominance in 3x3 market. Out of the box it was clicky, slow, and rough, although if set up properly it could be worked with to become an okay cube for the time. It is currently quite hard to find.

Released March 2018. An improvement upon the ZhanChi 2017 design. It had a new capped design, rounded internal corners and a brighter color scheme. But still considered an unstable cube, with noticeable corner catching.

Released January 2019. Considered a comeback for Dayan and their first competitively viable 3x3 in about 6-7 years. The public opinion on this cube is mixed. It is a huge step up from the XiangYun, however it isn't quite caught up to modern day speedcubes. This is the first mass-produced Dayan 3x3 with magnets. It has become known for being a quiet cube.

Released January 2019. Considered a comeback for Dayan and their first competitively viable 3x3 in about 6-7 years. The public opinion on this cube is mixed. It is a huge step up from the XiangYun, however it isn't quite caught up to modern day speedcubes. This is the first mass-produced Dayan 3x3 with magnets. It has become known for being a quiet cube. It is a very fast cube with very weak magnets. Popular for OH solving.

The TengYun v2 was a step forward for DaYan. It was released in early 2020, and featured customization options, such as adjustable springs, and magnet strength. It retained the smooth feel the v1 had, but was more stable and less quiet. This cube did have slight catching issues but for the first time, DaYan has a competitively viable cube (it wasn't too expensive and it performed well).

Dayan collaborated with MF8, another Chinese company, to produce a 4x4x4 Cube. It was considered one of the best 4x4's, and Feliks Zemdegs used it to break the average world record at WC 2011. However, without modding, the edges often popped if you tried to corner cut too much and most people switched over to the moyu aosu and later the yuxin blue and qiyi wuque when they were released.

Released October 2012. DaYan Megaminx is a Megaminx based on the GuHong v1. It's available in black, white and stickerless with, or without corner ridges.