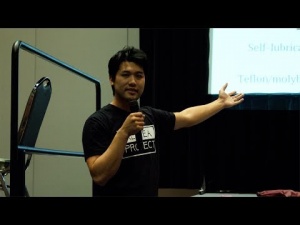 Alinea Project is an independent project started by Chris Tran which was developed in order to drastically improve cubing hardware, specifically 3x3x3 for now.

It is a common misconception that this project is under Cubicle Labs, however, Chris has explicitly stated that it is not.

The project has been halted due to high costs, adding up to US$3,396.34 of his personal money for 6 prototypes and extensive testing, and it is unknown whether the project will be picked back up or never returned to.

Alinea Project was initially publicly revealed at the CubingUSA Nationals 2017 competition starting around 5 minutes into Chris Tran's seminar, which was titled "One Small Step for Magnets-- One Giant Leap for Cubing" on the official competition page on CubingUSA.

The name "Alinea" comes from the Latin translation for "off the line" which is "a lineā".

Chris Tran's first feature that he revealed about Alinea was that he used very large corner and edge feet compared to other modern cubes. He noted that in the past, there had been a positive correlation between stability of cubes and the gradually enlargened feet sizes over time. In Alinea, he made the torpedo length 0.55 inches (13.97 mm), the corner feet 1 inch (25.4 mm), and the inner diameter 1.72 inches (43.688 mm), which in theory should make the cube extremely stable and did. In comparison, the measurements for the Valk 3 cube were a torpedo length of 0.35 inches (8.89 mm), corner feet of 0.69 inches (17.526 mm), and an inner diameter of 1.27 inches (32.258 mm). In an earlier prototype, the torpedo size for Alinea was even larger, but they were far too difficult to assemble and disassemble, meaning that they had to scale it back down a little in order to fix that issue.

Tensions in the Core

The following segment talked about magnets and the design which would make it easy for Chinese manufacturers to mass produce similar cubes to Alinea. A prototype piece that was developed included embedded magnets which cannot be done using injection molding but with spin casting. In constrast to most modern speedcubes which use two-piece or three-piece designs, this design is just a one-piece, hollow design. In order to place magnets in the cube quickly and have them never dislodge, Alinea includes holes on the outside of the piece which are meant to hold neodymium magnets in place. This design also gives full control of the magnet radius and magnet-to-magnet distance. In order to prevent magnet-on-magnet friction, use of any polymer of the manufacturer's choice is done.

The final segment discussed self-lubricating plastics, which have existed for multiple decades for high performance gears, but have not been used in speedcubes. Alinea uses teflon/molybdenum additives in order to drastically reduce friction.