GuoBing (國丙 or Type C) is a Chinese puzzle brand produced by WitEden. The Type C cubes were a popular speedcube around 2007 to 2010.

Type C (GuoBing) cubes were designed by WitEden (智力乐园) a nickname (and brand name) of a Chinese toy and puzzle wholesaler.[2] He has been posting his designs on the MF8 Chinese speedsolving forum since 2008.[3]

The Chinese DIY cubes were named in the order in which they were presented to the market. They used the Chinese celestial stem characters (甲,乙,丙,丁, etc) and were prefixed with 國 (guo, or "Country"), indicating a domestic product. As the third brand released, WitEden's cubes were called 國丙 (GuoBing), and were sold internationally as "Type C".

Type C cubes were somewhat choppy, loud and very fast, faster than Type A and less prone to lockups than Type D. It was considered by some to be a replica of the Rubik's DIY but with various improvements. The older versions had plastic washers and center caps that fell off easily; the later versions had metal washers and sturdy caps. Many speedcubers used this type.

This was essentially the same cube, but with slightly modified center piece which allowed easier removal of the cap. The retooled version had indents on the two opposite corner of the center, and the v1.5 had centers similar to the Japanese Speedcube Kit.

At 50mm, this was the largest of the Mini 3x3x3's. Only a little smaller than regular sized cubes of 57mm, some speedcubers actually used it as their main cube. It was also an excellent travel cube.

This was a smooth and lightweight cube. Its rounded corners (similar to the Type-F) made it good at cutting corners. 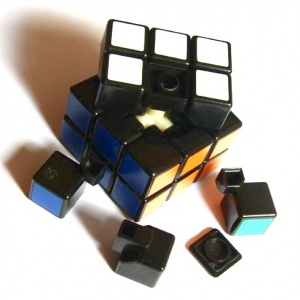