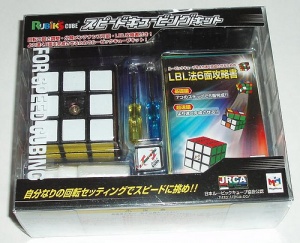 Japanese Speedcubing Kit was a Rubik's Brand DIY speedcube available around 2008/9. It was difficult to get outside of Japan, and so was not a widely used cube. At the time, it mostly received mixed reviews, but some cubers reported it to be a great speedcube.

It is functionally similar to a standard store-bought Rubik's 3x3x3, the main difference being removable caps and adjustable screws, plus it utilizes the Japanese color scheme (white opposite blue). In addition to the cube, the package includes a plastic stand, two screwdrivers (one flathead for removing the center caps, one Phillips head for adjusting screws), a tube of lubricant, and two instruction booklets (written in Japanese).