FMC notation describes the notation used for Fewest Moves. It is based on 3x3x3 notation, but has some special additions like using parentheses for NISS. 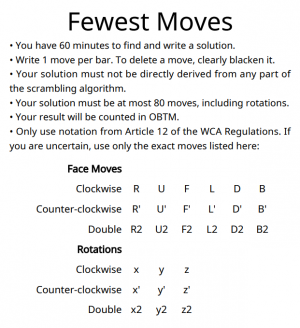 Moves approved by the WCA

Generally, all moves allowed in 3x3x3 notation can be used for fewest move solving, especially for explanations. However, officially, only outer block turns (R, U, L, D, F and B) and rotations (x, y and z), but no slice or wide moves, are allowed in the final solution. 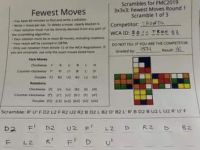 The final solution is what has to be submitted at the end of every successful attempt. It usually consists of only the pure moves, lacking any kind of formatting (like line breaks) and description (what each move does). Since it doesn't serve any explanation purpose and is only used to validate the movecount and whether the cube actually gets solved, moves are cancelled and only the officially allowed moves may be used.

A solution can be written in detail. This is mainly done to help the solver know what is accomplished by which moves and to simplify the sharing of explanations. Therefore, it is not necessarily required to have a detailed solution during an official attempt, although it is recommendable to do so as it gives the solver a better overview, allows going back to change or replace moves and can be helpful for explaining the solution to the delegate. (The latter only happens on very good attempts to ensure that no cheating like use of a computer program was involved.)

The detailed solution usually starts with the given scramble. Sometimes, although not very common, the inversed scramble is also given when NISS is used to save the viewer from having to inverse the scramble themselves.
This is followed by a blank line and the moves and explanations for each step. Each step receives only line that starts with the applied moves. It is followed by two forward slashes (//) to indicate extra information, after which the name of the resulting state is given. (E.g. if a 2x2x2 block was already solved and a 1x2x2 block was added to it, the resulting step would be a 2x2x3 block, or simply 223.) Often, the movecount is given in parentheses after the step name, where the first number is the number of moves in this step alone and the second number is the number of total moves up to this step. Both numbers are usually separated by one forward slash (/). The movecount may also include cancellations using a minus sign like in 6-2. For the moves, any widely known notation can be used. The moves may also sometimes be placed in parentheses when using NISS, specifically when they should be performed on the inverse scramble. Cancellations (unless not very complex) are usually not done at this point for easier understanding.
This detailed part is then compressed to the final solution, so that all cancellable moves are cancelled, only officially allowed moves are used and scramble switches are removed. If this is not done in an official attempt, the number of moves can be added after the solution in parentheses. The final solution could then be applied to a cube scrambled with the normal scramble and will result in a solved cube.

When using Skeletons and Insertions, a few extra steps may be required.

Firstly, the skeleton can (but doesn't have to) be written in the style of the solution with cancelled moves, no NISS etc., except that this only solves most of the cube instead of all of it.

Insertions can be added by assigning them to a special character (anything that couldn't be misinterpreted as a move can be used, some common ones are #, ^, $ and @, although even emojis may be used) using an equals sign (=) below the skeleton but still above the solution, as the solution should always be in the last line. The moves out of the total moves up to that point and even the resulting step can be added as well, if prepended by two forward slashes (//).
The character representing the insertion can then be inserted in either in one of the steps or the skeleton, this mainly depends on what the solver did. When NISS is used, it is often recommendable to insert into the skeleton so it is easier to see cancellations.

In the end, the skeleton and the insertions are compressed again into the final solution, where the characters are replaced by their respective moves and the resulting moves are converted like explained before.

The following is an example of a detailed solution, specifically Chad Batten's 18 move WR single.