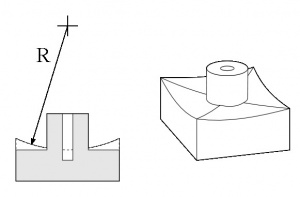 A center piece of a puzzle is a piece (also called cubie for a cubic puzzle) that only has one sticker and lies on only one face. On the 3x3x3 there are 6 centers, one for each color, which do not move. On larger cubes (such as the 4x4x4), however, there are many center pieces of many different types. Here is an illustration of all the types of centers:

The types of centers are the following: