Blockbuilding is a method for intuitive solving by creating groups of blocks and joining them together in very few moves. It is used in the sub-steps of many methods including: Petrus, Heise, Roux and ZZ. Blockbuilding often is an alternative to using algorithms, although blockbuilding itself can become almost algorithmic for people who blockbuild a lot and therefore are very familiar with the different cases.

Blockbuilding is a very powerful tool for FMC as it allows for solving lots of pieces in very few moves. It is present in virtually all FMC solves due to being compatible with a variety of other Fewest Moves techniques like Edge Orientation, Insertions and even Domino Reduction.

Most people use the reduction method to speedsolve the 5x5x5 cube but a few use direct solving to complete the puzzle. While doing that, there are some situations that does not occur on the 4x4x4 cube (or any even-layered cube). Below is a listing of some algorithms. They are also useful for 5x5x5 BLD.

This is when blocks are built in a way that the colors around the edges of the blocks are correctly solved but those colors don't match the other solved pieces on the puzzle. The use of non-matching blocks is common in FMC. The first known user of this technique in speedsolving is Ryan Heise in his Heise method. In this method, four 1x2x2 blocks are built so that an F2L-1 shape is formed. The colors of each 1x2x2 don't have to perfectly match the colors of the other 1x2x2s. Gilles Roux also experimented with non-matching blocks for his Roux method. James Straughan explored the technique by creating the NMCLL recognition system, a Roux non-matching blocks guide, NMLL, A2, A3, and the MI3 method.

Passive blockbuilding is an advanced form of pseudo blockbuilding developed for A3. In this technique, the pieces within any built blocks don't have to be correctly oriented or permuted. For example, a pair from a different part of of the puzzle can be attached to a correctly built 1x2x2. Another example is having edges in any position within a block. After the blocks are built, they are corrected during an algorithm step of a method. 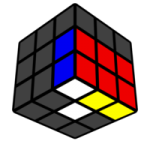 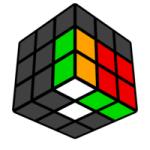 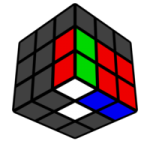 This is when blocks are built using only colors from opposite sides of a puzzle. This style of blockbuilding was first used in the MI2 method. Oriented/Domino blockbuilding is a subset of passive blockbuilding. 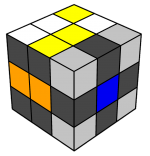