Difference between revisions of "YongJun"

Manufacturer of the Type-D Cube, also known as YUGA.

Also called 'GuoYou', Type D cubes ship fully assembled and stickered. The color scheme varies, but generally they are stickered in either the Japanese color scheme or a mirrored version of the Western color scheme. The original stickers are generally not as robust as most vinyl stickers, which is why Cube4You ships a set of better stickers with each cube. Recent Type D orders came stickered with nicer vinyl stickers(similar to storebought stickers) in the Western color scheme. Type D cubes rarely pop, unlike Type A cubes. They also are decent at cutting corners. The argument as to which is better for speedcubing, however, has not been settled. Some people recommend replacing the Type D core with a Type A core. It is also recommended to try a hybrid of this cube with Type C cubies. 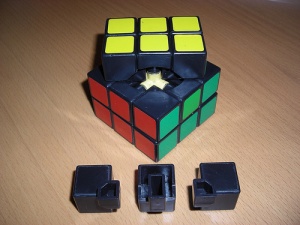 There are two different types of Type-D cubes. Generation one Type-D's come in many different colors: Pink, Green and Black and White. The generation 2 Type-D's, also known as Type-D II are white. The stickers that come with the Type-D II are somewhat textured and do not peel off easily. The spinning is very smooth, rarely locks up, cuts corners but sometimes pops if spinning too violently. Each cubie is fully closed and has caps that rarely fall off. If they fall off, to fix it, just simply place the cap back on and push down. There are many types of YJ D-II type cubes produced such as the new Finhop 3x3 and the crazy foot cube. All have similar performance and very good quality

The YJ company also makes 2x2, 4x4, 5x5, 6x6, and 7x7 cubes, all these with the exception of the 2x2 and 3x3 use a knock-off v cube mechanism and you should not buy them if you are against knock-offs, the 6x6 also comes partially modded with 2 internal pieces built into the core.

The Diamond Cube features diamond-like shaped tiles on the pieces in place of stickers.

The Love Cube features heart-shaped tiles on the pieces in place of stickers.

The YJ GuanLong is a Budget cube from YJ. It features a simple, blocky mechanism and is popular for modding.

The Spade Cube features spade-shaped tiles on the pieces in place of stickers.

The YuSu R is an updated version of the YuSu, which incorporates elements of the GuanSu into its design.

The original YJ 5x5. Also came in a smaller size.

The GaunFu and YuFu were released at the same time. They use the same mechanism, but the GaunFu comes in black or white plastic with stickers while the YuFu comes in stickerless plastic.