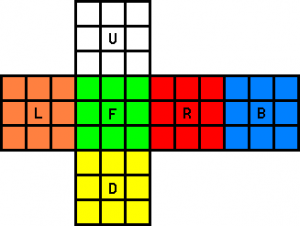 This color scheme is also known as BOY, short for Blue-Orange-Yellow, for the arrangement of colors around one of the cube's corners; or Minus Yellow, referring to the relation between each opposing sides' colors, as described below.

One interesting thing about this color scheme is that the color of any side, plus or minus yellow, equals the color of the opposite side.