Difference between revisions of "The Ideal Solution" 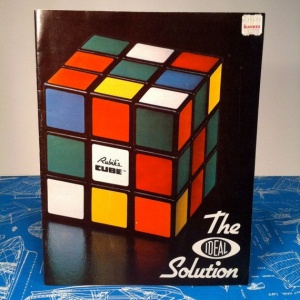 The Ideal Solution is the somewhat corners first solving method presented in the 1980s by Ideal Toys, the company responsible for producing the original Rubik's Cubes. The method is somewhat unorthodox, being that it solves the corners first of the first layer, then solves the first layer (or top according to the instructions), then it does the same with the Last layer (or bottom), and finally finishes by solving the 4 middle layer edges.

The solution guide was written by Robert (Bob) Weisman in 1981. He was working as a Sales Promotion Manager for Ideal Toys, and was part of the team that introduced and promoted Rubik’s Cube when it was launched in 1980. Once the cube craze hit, consumers began writing to Ideal asking for a solution. Weisman offered to write one: it took him six months of flipping and exchanging cubies at home before he developed a solution. It was published as "The Ideal Solution", and was offered to customers who wrote in for $1.50 plus postage. He estimates that about a million and a half copies were sold, and eventually it was sold in stores alongside the Cube. His initials "RW" are inside the first page. Weisman was also an editor for Ideal's four Rubik's Cube newsletters.

The Ideal Solution has advantages and disadvantages over the Layer by layer method sold with modern Rubik's brand cubes ([1]).