Difference between revisions of "Studio Cube"

The Studio Cube is a 3x3x3 manufactured by Rubik's in Hungary. It shares many similarities with the original cubes manufactured in the 1980s, such as vinyl stickers (unlike the paper stickers laminated with PET, as found on current store bought cubes) and flat centers (as opposed to the arched centers found on most modern cubes). The center caps are also removable to allow access to the adjustable screws, although initial removal may be difficult.

Purchase price is variable, currently about $15.49 plus shipping on eBay (as of 2010), going up to $20 in 2007. The higher than average price can be attributed to the low numbers of cubes produced per year, hand assembly, and labour costs, all in comparison to Asian manufacturers.

Opinions about its suitability for speedsolving vary, although generally it is not a preferred cube, due to the flat centres (more prone to pops), required break-in, and possible modifications required (replacements of springs, screws, and possibly the core). 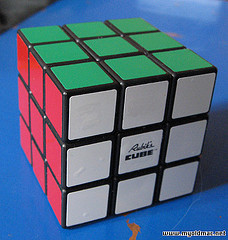 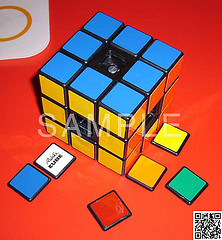