Difference between revisions of "Skeleton" 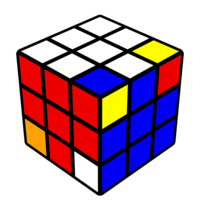 A Skeleton is a nearly finished solution in a Fewest Moves solve. The intent behind a skeleton is to do the majority of the solve, then insert the final moves somewhere within the skeleton that give fewer moves than performing a different algorithm at the end. A common technique is to create a skeleton leaving 3-5 corners, then review their position throughout the solution to find the optimal place to insert (an) 8-move commutator(s) that, ideally, cancel moves within the skeleton.

While 3-5 corners is the most common skeleton configuration, a skeleton could essentially take any form - such as leaving a three edge cycle, double edge swap or one edge and one corner swap.

Since there are so many possible skeletons, the following naming conventions have been established to differentiate them:

Here are some examples to demonstrate the rules in use:

The easiest way to find a skeleton is using Blockbuilding, where the one tries to solve as many pieces as possible in as few moves as possible so only a few are left. For this kind of solving, it is best to force any kind of skeleton that can be solved using at most two corner insertions (e.g. 3c, 4c, 5c, 3c1t and 2t, but not 6c and 4c1t) since these are shorter than most edge insertions and are easier to set up to. The best possible case is 3c, although the other mentioned skeletons can be good alternatives if reaching 3c would take too many moves.

The mentioned corner skeletons can usually be found by solving until F2L-1+EO and solving the edges using very few moves. A viable way to reach 3c is also to use Heise techniques.

When edges are oriented at the beginning of the solve, the general approach is similar to the one used in Standard Blockbuilding. However, one major difference is that special edge skeletons like 3e and 2e2e become more efficient with EO since short algorithms for these cases (like R' L F2 R L' U2 and R2 U2 R2 U2 R2 U2) often require edges to be oriented, so these cases are more probable to come up with EO.

The viability of certain skeletons drastically changes when Domino Reduction is used. Corner insertions become more inefficient, often only cancelling one move, since more half turns and less quarter turns are used. Meanwhile, edge insertions become much more efficient since edges are already oriented and more half turns, which are common in edge insertion algorithms like R2 L2 U2 R2 L2 D2 and R2 F2 R2 U2 R2 F2 R2 U2, are used. This means that it often is more efficient to solve all corners along with some edges instead of the other way around.