Difference between revisions of "Megaminx" 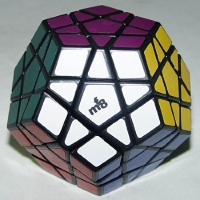 The Megaminx is a puzzle in the shape of a dodecahedron that was first produced by Uwe Meffert, who has the rights to some of the patents. Each of the 12 sides consists of one pentagonal fixed center, five triangular edge pieces and five corner pieces. The corner and edge pieces are arranged in a five-pointed star pattern. It has 1.01 x 10^68 positions on the 12 colour version and 6.14x10^63 positions on the 6 colour version. A variant where the cuts are a little deeper, so that each face has a five-pointed star on it, is known as the Hungarian Supernova, but since it is similar these names are often interchanged.

The standard colour scheme for most 12-colour Megaminx puzzles is as follows:

In addition, the colours of the faces around the white face are, in a clockwise order: red, green, purple, yellow and blue.

Some manufacturers (most notably C4U) sometimes use black stickers instead of white, or brown instead of pale yellow.

The way the Megaminx functions is very similar to the 3x3x3: it has fixed centers, edges with two orientations, and corners with three orientations, and each turn moves the same number of edges and corners. Because of this it can be (and usually is) solved with a variant on a 3x3x3 method, either by placing edges and then corner/edge pairs (like the Fridrich method) or simply building a series of blocks (like the Petrus method). It is also possible to finish using some OLL and PLL algorithms. The biggest difference from the 3x3 is that slice moves are not possible and therefore methods that solves edges preserving corners are having much longer algorithms.