Difference between revisions of "MF8 Gigaminx" 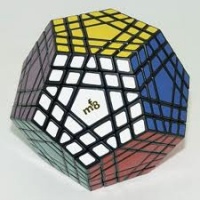 The MF8 Gigaminx is the best mass produced gigaminx in the market today against the Cube4You Gigaminx which is known to be terrible. Turning is pretty bad out of box and is barely fingertrickable. Out of box the tensions are set at its maximum, after loosening it and lubrication and a little bit of breaking in the performance would rise greatly and live up to its name. After broken in the gigaminx fingertricks easily and barely locks up. The inner layers dont get caught unlike the terrible Cube4You. It has a nice clicky feeling when turning and feels study when holding it. Great addition to a collection or for fun. Get this you won't regret it.