Difference between revisions of "Joy Cube" 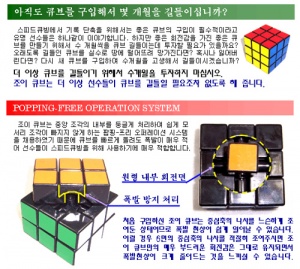 Joy cubes were sold by www.cubenjoy.com, a Korean cubing webstore. They were very hard to buy outside of South Korea, although they could be acquired from the Japanese puzzle company Tribox. Production ceased in 2010.[1] It is possible that the manufacturer was Shin-Gwang-Sa, the Korean company responsible for the Edison cube.[2]

Joy cubes were much lighter than Edison cubes, and were fast and crispy, although with a tendency to pop. It was well known for having very light turn resistance, making it ideal for One-Handed cubing.