Edison was a Korean puzzle brand which achieved some international prominence in the years around 2007-2012.

Edison cubes were made by SinKwangSa (신광사 also transliterated as Shin-Kwang or Shin-Gwang-Sa), a company mostly specialised in selling jam-free copying papers.[1] They produced the first cube in South Korea around 1990 with the name of "Nobel cube". The Nobel Cube was an exceptionally stiff cube, and it was impossible to speedcube with it.

The Edison Cube was their most famous product in the speedcubing community, and for a few years around 2007-2010 it was comparable to the other speedcubing brands such as the Rubik's DIY and the Chinese speedcubes. The Edison Cube was, however, very hard to buy outside of South Korea, although it could be acquired from the Japanese puzzle company Tribox. In 2009 User:Osaka on the speedsolving forum set up www.edicubes.com to aid ordering and shipping from South Korea.[2]

SinKwangSa may have made the Joy Cube, sold for a limited time by cubenjoy.com - a Korean cubing webstore.[3] They were also responsible for the "Sky Cube", which may, however, have just been a rebranded Chinese import.[4] 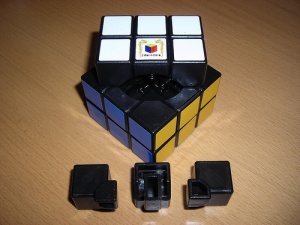 The Edison 3x3 cube was notable for being one of the heaviest 3x3x3 cubes available. It was stiff when new, and required lubrication/breaking in. The cubies were very square with no anti-pop mechanisms. There was some forward corner-cutting of around 35-40 degrees, but no reverse corner-cutting. The sticker shades were very dark.[5]

There were other puzzles available in the Edison brand. These included:[6]