A3 is a pseudo technique for 3x3x3 and other puzzles. It is the application of pseudo solving within blockbuilding and resolving the pseudo during an algorithm of a later step. This is as opposed to non-matching blocks or Transformation where the pseudo is one or two turns away from the solved state and is often resolved intuitively. A3 can be seen as the 3D, or blockbuilding, version of the concept used in EG or RoFL[1].

1. Passive Blockbuilding - This is when a user freely builds blocks or pieces and places them without regard to orientation or permutation. When placed, the pieces can be not permuted, not oriented, or both. Blockbuilding can consist of 1x2x3s, 1x2x2s, 1x1x2s, or even lone pieces.

2. Resolution - Once the user reaches a point where they recognize a case for which they know an algorithm, the algorithm is applied. This algorithm simultaneously positions pseudo blocks or pieces that were built in the previous step. If there are other steps after this resolution algorithm is applied, the user can continue solving what is left. Resolution can be applied during any algorithm set that is a part of the solve. In ZZ, resolution could be used in OCLL, PLL, NMLL, EPLL, ZBLL, or any other variant. In Roux, resolution would be ACMLL. 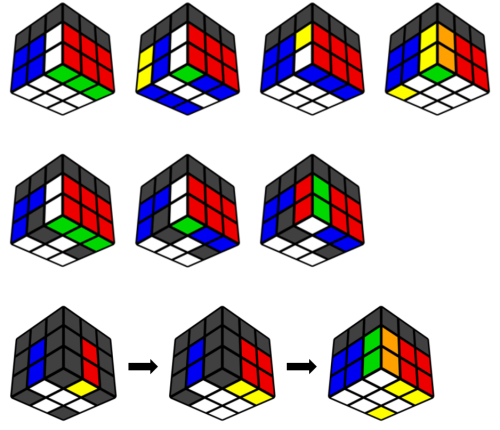 A3 can be used as a framework to improve existing methods. Because of the free nature of this system, there are many add-ons that users can create. These add-ons are the combination of new types of pseudo blocks and the associated algorithms that later solve a case and adjust the pseudo blocks. Additional techniques, such as Transformation, can be used to further reduce the move count and reduce the number of cases. This system can also be applied to big cubes and other puzzles. In big cube direct solving methods, for example, the inner layers can be pseudo built in the same way that the outer layers are when A3 is applied to the 3x3x3.

The Resolution step works best in steps with few cases. This is because as the solver adds to the types of blocks they build, a new algorithm set is learned. In the ZZ method, ZBLL is a good fit for the non-matching blocks that are an R/R'/R2 away because solvers don't have to learn new algorithms. However, it probably wouldn't be a good choice for anything further because of ZBLL's high case count. OCLL, EPLL, NMLL, or PLL would be easiest in ZZ.

The application of A3 is best done progressively and it is likely best for solvers to start out with simple non-matching blocks. These are easiest because they don't change recognition much for the resolution step. Then solvers can move on to learning another pseudo type that is easy to recognize and build. It probably isn't worth it to go to the extreme depths. However, what is considered extreme is method relative. A misoriented edge or pair would be extreme in ZZ, but not so much in an F2L method that doesn't orient edges early.