Given a group, a commutator is an element of the form ghg'h' (also denoted [g, h]), where g and h are elements of the group with inverses g' and h'.

So in some way, the commutator allows you to measure to which extent the moves do not commute. 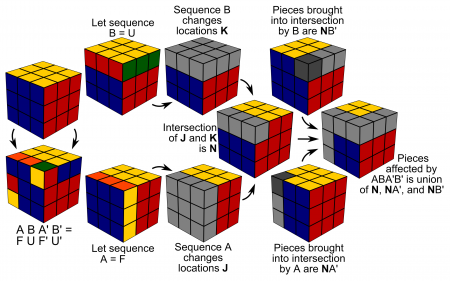 This image defines the terms J, K, N, NA’,NB’ used to describe how the commutator works.

To help us discuss how a commutator works we will first define some terms.
The image on the right gives a visual indication of which pieces of a cube are affected by the different sequences of a commutator. In the example commutator chosen, the sequence A is F and the sequence B is U, giving the simple commutator [F, U]. Referring to the image, the sequence A changes the pieces at a set of locations we will call J. The sequence B changes the pieces at a set of locations we will call K. We will call the intersection of J and K, N. If J and K have no intersection, such as when A equals L and B equals R, then A and B are said to commute, and the commutator [L, R] does nothing. However if, as in the image, when J and K do have an intersection, A and B generally do not commute and the cube, as a result, is changed by the commutator. Note that the changes which this particular commutator make to the cube are rather difficult to understand, however more straight forward commutator examples will be discussed in a moment.

There is a set of locations that we will be calling NA'. This name is appropriate because the pieces can be identified by applying the inverse of A to the locations N. Referring to the lowest right hand cube, these particular locations are identified using two shades of grey. Pieces that are lighter grey are pieces that will be brought into the intersection region N, pieces that are darker grey are pieces that are already within the intersection region and will remain in the region. Such pieces will however be moved within the region, as in this case, or will be twisted in place.

All of the above statements regarding the NA' region is also true for NB' region.

The only pieces that are affected by any commutator are the ones located in the union of N, NA' and NB'. In other words, pieces that are affected by a commutator are those who are at the intersection of both moves, or are brought into the intersection by A or B. Other pieces, even if they are temporarily mixed up after the sequences A and B are executed, will be put back into their original locations with sequences A' and B'.
This restoration of all the pieces that are not in the union of N, NA' and NB' is the reason the commutator is such a powerful tool.

Click the following thumbnail for an image similar to the one just discussed which instead uses the more common commutator [B' D B, U'].

When J and K have no intersection, A and B commute, so the commutator does nothing.

The conjugated move is U2. Because only middle slice pieces are changed at the end, we can safe ignore top-left and top-right pieces. The relevant part of U2 is just a swap of top-back and top-front edges. Thus, M' U2 M swaps front-top and front-bottom edges.

So [M', U2] can be understood as: swap front-top and front-bottom edges, then swap top-back and top-front edges, which yields a 3-cycle of edges.

There is a quirk part, the front-bottom edge, which is affected by both [M': U2] and U2, i.e. by all four moves of the commutator. 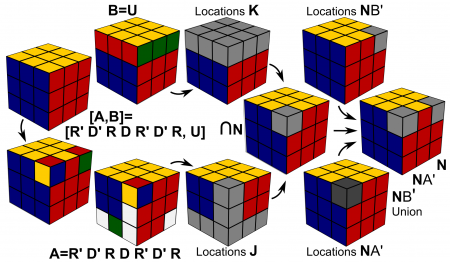 This commutator twists two corners in place. It is an example of a commutator in which NA'=N. Applet of commutator

To appreciate sequence B's interaction with the intersection region one can observe the general nature of a commutator. Looking at the mathematical structure of a commutator, A B A' B' one can see that it has two overlapping conjugates. ie A B A' B' = (A B A') B' = A (B A' B'). (If one is unfamiliar with conjugates it is critical that one read the lead of the conjugate page now before continuing.) It is the action of the second conjugate, B A' B', that is apparent in this type of commutator. Because sequence A' only alters the contents of the intersection region, sequence B can be viewed as the initial setup move of a conjugate, A' can be viewed as the actual manipulation move and B' can be viewed as the restoring move. Regarding this specific commutator, because sequence A twists the corner piece at NA' counter-clockwise, the sequence A', which is acting as the middle manipulation sequence of a conjugate, twists the corner piece at NB' clockwise. 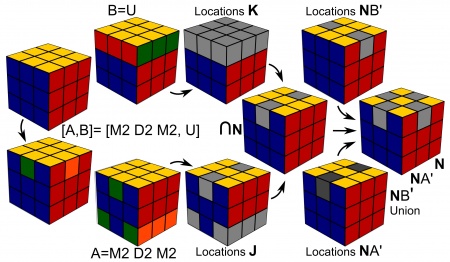 It is an example of a commutator in which NA'=N. Applet of commutator

Everything else discussed regarding the previous example applies here as well.
Here is an applet of this commutator

In summary: Sequence A initially alters the pieces that are in the intersection region, then sequence B, acting as the setup move of a conjugate, moves a different group of pieces into that intersection region. Sequence A' then, while restoring the rest of region J, "reverse alters" those new pieces and sequence B' finally returns both altered groups of pieces back to their original locations.

When NA' and NB' are not included in N, there are three sets involved in the commutator:

When there is only case 1, it is in fact the cases studied before. So we are left with those possible cases:

Referring to the animation below, when sets do not overlap, the commutator can be summed up by:

We notice that NA and NB are used as temporary storage:

Note that NA may or may not overlap with NA', and NB may or may not overlap with NB', but that it does not have any implication, except that the location where the pieces come from can also be the location where they are temporarily stored. The most obvious case is when NA equals to NA', or NB equals to NB', which means that pieces of the intersection N are swapped with pieces of NA' or NB', as in [R2, F2]

In other words, all the commutator does is:

This is the most complex case, because it is like the "no overlap" case, but with additional interferences.

Some pieces in the intersection N are hidden in a storage, thus protecting them from being scrambled by the interference due to the overlap.

Let's call HB the location of pieces hidden by B:

Similarly, pieces are hidden by A:

We will also use pieces that are hidden by A' so that they are not affected by B':

In order to get the same results as in the "no overlap" case, we will redefine the set of pieces:

We get the same result as before:

So PA are front-right-top corner and top-right edge.

The quirkiness is that the locations of those pairs overlap, and that an extra location is used, the top-right-back corner. Pieces that are initially in this location are moved according a special scheme (see below).

In this example, the top-right-back corner goes to the top-front-right position, thus being separated from the edges around it.

Some pieces are outside of the pseudo 3-cycle and never hidden. Let's call their starting location the quirk part Q.

Those pieces PQ are never hidden, thus being affected by all moves of the commutator:

Some pieces are outside of the pseudo 3-cycle, but are hidden by A or B at some point. So they are conjugated. Let's call them PC and their starting location C.

In the overlap case, either Q or C is non empty, so there are at least 4 sets of pieces: PA, PB, PN and PQ or PC.

In complex cases, there may be five sets with both PQ and PC.

The quirk part and the conjugated part are used as final locations for pieces that go outside of the pseudo 3-cycle.

The conjugated part is :

The front-right-top is affected by R'F'R so it is equivalent to x'F'x which is U'.

The front-bottom-left is affected by F'RF so it is equivalent to z'Rz whichi is D.

So this move does :

Pieces can be affected by one, two, three of four elements of the sequence A B A' B'. The gives use the different sets of pieces. For each element of the sequence, there are two possibilities, either a piece is affected by this element, or it is not. So there is a maximum of 24 = 16 sets.

If a piece is not affected by any element, it means that it is completely outside of the commutator.

Pieces affected by one element only

If a piece is affected by A and A', or by B and B', it means that it comes back finally where it comes from. We can ignore them.

If a piece is affected by B and A', it means that it is brought into the intersection by B. They are denoted PB.

If a piece is affected by A and A' B', it means that it is hidden by A so that it is not affected by B. These pieces are denoted PN because they come from the intersection.

If a piece is affected by A B and B', it means that it is brought into the intersection by A, and then hidden by B from A'. These pieces are denoted PA.

Pieces affected by all four elements

If a piece is affected by all four elements, it means that it is never hidden from the intersection. Thus it is in the quirk part. They are denoted PQ.

Summary of sets of pieces

In all cases, pieces that are moved by the commutator are in one of these sets:

If it is an inplace case and not a "double inplace", then some pieces are affected by a commutator. Thus PC is not empty.

If the sets PA, PB and PN are not empty, we cannot deduce anything about PQ or PC. If it is the no overlap case, then pieces are hidden either by A or B, so PQ is empty. Conversely, if PQ is empty, then pieces brought by A into the intersection are completely hidden by B. The inverse of the commutator B A B' A' shows that also A hides pieces brought by B, so that it is a no overlap case.

So we get the following possible types of commutators: