Location:
I live in a rural area called Gherang, it’s around 100km west of Melbourne, Australia. 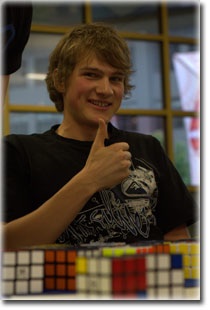 What is your favorite event, why?
I’ll say 3x3 blindfolded. Besides being quite a short event, one of the reasons I enjoy it is because of commutators. Intuition is fun and creates more of an accomplishment than solving with brain-dead memorised algorithms. Another reason is I find the mnemonic systems interesting, and they can sometimes be applied to non-cubing situations. Also, due to me using images to memorise edges, 3x3 BLD benefits both multi and big cubes BLD.

What made you become interested in solving puzzles?
Around mid-2008, my dad found an old cube at home. We decided to buy a new Rubik’s cube from Toys R Us. After a week, I learnt how to solve it using a LBL method in the solution booklet. I began timing my solves, but lost interest after a few months.

A while later in July 2009, I realised I was never good at cubing and solving from the ‘memorised instructions’ wasn’t skilful at all. This random thought motivated me to get back into cubing and do it properly. I’ve been cubing since.

What, in your opinion, is your biggest "cubing" accomplishment?
Becoming 3x3 BLD world champion at WC 2011. It was an amazing feeling to know I performed my best at the most important time.

What are your other hobbies?
I enjoy going outside, just about every night I go for a run. Other activities I do include climbing, shooting and fishing. I love learning about the natural world/universe and reading random science.

What is/are your pet peeve(s)?
Littering and babies crying. I also find it annoying when naive people are conned into scams and expect sympathy.

What will the future of cubing be like and how would you like cubing to progress?
I think in a few years the rate at which world records are broken will have greatly decelerated. Perhaps the ‘human limits’ of cubing aren’t that far away. The rankings will become extremely tight between the top cubers and I expect there to be more people tied on world records.

I hope cubing continues to be regarded as a fun hobby rather than a competitive sport.

So far, what has been your most enjoyable cubing experience?
Definitely World Championship 2011. This was my first time overseas, so Bangkok itself was a very interesting experience. It was awesome to finally meet some really great people in person. The competition was both a friendly and competitive atmosphere.