September 20, 2011 : Interview with Speedsolving.com member Breandan Vallance : Currently (at the time of this interview) is ranked 4th in the world for 3x3x3 Average (8.81 Seconds). He has won 13 different competitions (in 3x3x3), including the 2009 World Championship (10.74 second average). 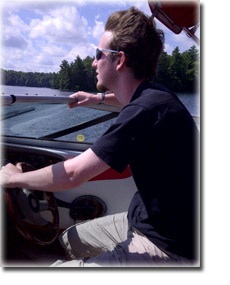 What is your favorite event, why?
That would have to be 3x3. I just love the aesthetics of a 3x3 speedsolve. It's also a great way to pass time on the move.

What made you become interested in solving puzzles?
I first solved the cube by myself when I was 12 or 13 using a corners first approach. I had no idea speedsolving even existed and after I solved it I did some research on the cube and came across Macky's 12.11 video which was the world record at the time. It completely blew my mind! Not long after that I decided to learn the Fridrich method and got sucked right into speedsolving.

What, in your opinion, is your biggest "cubing" accomplishment?
Winning the World Championships in 2009. I had always done so badly in competition before then, even in the first 2 rounds. I can't even describe how overwhelmed I was to finally get a good official result and for it to be in the finals of still the biggest competition to date.

What are your other hobbies?
Hmmm, I guess my main other hobbies are flying RC planes(though not so much recently) and juggling. I have many other smaller interests/minor obsessions/things I enjoy such as cycling, tetris, pen spinning, collecting cool stuff, unicycling, badminton, tennis, bowling, swimming, reading, movies....

What is/are your pet peeve(s)?
I have a bunch of cubing ones. Most of the things non-cubers say about cubing, people who say "finally" for no reason, but worst of all people who steal cubes! It really makes me sick. Speedcubing is supposed to be a friendly community. A non-cubing one is people who complain so moving on...

What will the future of cubing be like and how would you like cubing to progress?
I'm not even going to bother predicting, almost all of my WR predictions have been surpassed, mostly by a lot. For me, speedcubing is about making and hanging out with friends from all over the world. I hope the community will continue to spread and grow so I can keep meeting more awesome people.

So far, what has been your most enjoyable cubing experience?
My best cubing experience was my entire trip to the US and Canada. There were a lot of American cubers who I'd wanted to meet for so long as well as many who I'd spoken to online but never had the chance to meet in person who were there. I had so many great experiences there, as you can see from the picture I'll definitely be going to Nats again next year.